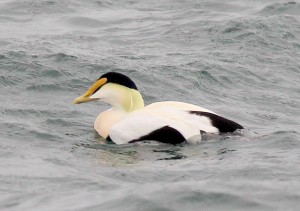 Sea Duck hunting Eider on the East Coast, Atlantic flyway or West Coast Pacific flyway is an extreme challenge any sea duck hunter welcomes.  These strong sea ducks are the largest North American duck/sea duck species. The male Eider weighs up to 6 and a half pounds. The drake’s head is white with a black cap and a greenish nape. A fully mature male Common Eider will have a beautiful salmon color over his white breast. It has a long sloping olive or yellowish colored bill with a gray tip. It has a white breast, black flanks and a black tail. The adult hen has a barred brown body and brown head with a gray bill.
(ref: Flyways.us and National Audubon Society)